A fragment from the tomb of nefermaat and itet essay

Weathering — Weathering is the breaking down of rocks, soil, and minerals as well as wood and artificial materials through contact with the Earths atmosphere, waters, and biological organisms. Two important classifications of weathering processes exist — physical and chemical weathering, mechanical or physical weathering involves the breakdown of rocks and soils through direct contact with atmospheric conditions, such as heat, water, ice and pressure. 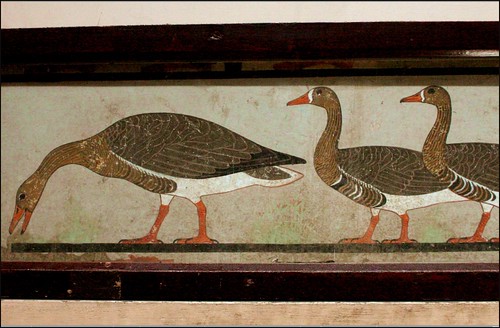 His name means " Maat is beautiful" or "With perfect justice". Biography[ edit ] Nefermaat was the eldest son of Sneferuthe pharaoh and founder of the 4th Dynasty of Egypt, and his first wife. He was a half-brother of Khufu. His son Hemiunu is probably identical with vizier Hemiunu who was believed to have helped plan the Great Pyramids.

Nefermaat was one of several relatives of Pharaoh Sneferu who was buried in Meidum. The tomb is known for the special technique used for drawing the scenes. Sculptors carved deeply incised images which were then filled with colored paste. This method was labor-intensive and the paste tended to dry, crack and then fall out.

This tomb is the only one known to date showing this technique. The fact that the plaster cracked resulting in the loss of the paste likely led to the craftsmen abandoning this type of decoration.

The scene executed in painted plaster was discovered in by Auguste Mariette and Luigi Vassalliand removed from the wall by the latter in order to being reassembled inside the Bulaq Museum. The full scene depicts six geese; three pointing to the left and three pointing to the right. Each group of three geese consists of one goose shown with his head bowed down, eating grass and two geese with their heads held up.

The group of three animals actually represents many geese, as three represents the plural in Egyptian writing. There are differences in the plumage of the birds which break the overall symmetry of the scene. This example of Egyptian painting is considered a masterpiece.Fragment from the tomb of Nefermaat and Itet, Meidum, Egypt, Old Kingdom, Dynasty 4, reign of Snefru, c.

Nefermaat I was an Egyptian prince, a son of pharaoh Sneferu. He was a vizier possessing the titles of the king's eldest son, royal seal bearer, and prophet of Bastet.

States and territories started in 1395

- CYA from Alamy's library of millions of high resolution stock photos, illustrations and vectors. Nefermaat and his wife Itet, from a relief in their tomb at Meidum.

Nefermaat was a son of Snofru, the founder of the 4th Dynasty. As such he was the half brother of Rahotep and of Kheops, the second king of the 4th Dynasty. Tomb of the Unknowns Wreath Laying Writing Prompt Dear Students, In just a few weeks, the fifth grade class will be going to visit our nation’s capital, Washington, D.C.

Tomb of Nefermaat I and his wife Itet. Salamis, Cyprus [videos] Salamis (Ancient Greek: Σαλαμίς) is an ancient Greek city-state on the east .